That Elon Musk certainly is proving to be a rascal, as he continues to seek a way to wriggle out of his $44 billion Twitter takeover deal.

With the Twitter v. Musk trial scheduled for October 17th – just 34 days away – Musk’s legal team has been desperately seeking either a delay of the hearing, in order to better prepare their defense (or just to hold things up even more, in the hopes that will help him avoid payment), or to get the case dismissed entirely, on increasingly spurious legal grounds.

But questionable approaches or not, Musk’s lawyers are certainly doing their job, exploring every avenue they possibly can to extricate Musk from the deal, if there’s any possible way to do that.

Which, there’s probably not. But still, worth a try.

Team Musk’s latest proposed case for dismissal comes on the back of Peiter ‘Mudge’ Zatko’s various accusations against Twitter over its internal operations, and flaws in its reporting and security systems.

Zatko, who was employed by Twitter between late 2020 and early this year, was dismissed, Twitter says, due to ‘poor performance and leadership’, though he was paid out a handy $7 million for his time.

That payment is now the basis of Musk’s latest legal appeal against the takeover deal, with Musk’s legal team arguing that the millions of dollars that Twitter paid to Zatko are actually in violation of the terms of the deal.

Because Zatko and Twitter came to the settlement agreement in June – after the Musk takeover deal had been agreed to – Musk’s team says that this is a major change in the scope of the company, which is not allowed under the terms of the takeover deal.

Though Twitter moved quickly to shut down that suggestion:

“Twitter has breached none of its representations or obligations under the Agreement, and following the receipt of the approval of Twitter’s stockholders at its September 13, 2022 special meeting, all of the conditions precedent to the closing of the Merger will be satisfied.”

As noted, Twitter’s shareholders are meeting this week to vote on the Musk takeover, which is the final step, in Twitter’s view, to securing the deal. Twitter has urged shareholders to accept Musk’s $44 billion offer, and the expectation is that the vote will go through without a hitch.

Which will then clear the way for the final settlement, which Twitter’s legal team remains absolutely confident will eventually go through, after the October hearing.

Musk’s team, on the other hand, seems far less assured, pulling out every trick and loophole that they can find to push back. None of those efforts have held up so far, though that doesn’t mean that they won’t find some other technicality to get Musk off the hook when the hearing does actually have its day.

It’s worth noting that Musk has previously been able to utilize a range of legal loopholes and technicalities in various other legal actions that have been brought against him.

Back in 2019, after Musk baselessly accused a cave diver of being a pedophile via tweet, and was subsequently sued for defamation by said diver as a result, Musk’s legal team was eventually able to get the case dismissed entirely, because Musk didn’t technically mention the accused in the offending tweet.

What Musk did say was this: 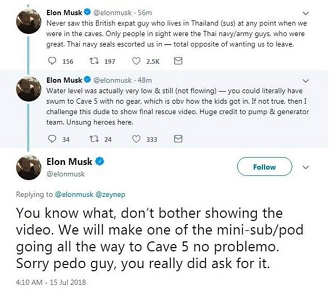 So it’s pretty clear who Musk was aiming his comment at, but he didn’t specifically name anybody, which Musk’s legal team was able to argue raised significant enough doubt over his actual intent.

In other words, they’re good, and they can find and prosecute legal loopholes pretty well – which, of course, is what you’d expect when they’re working for the world’s richest man.

As an aside, Musk also hired a private detective to dig up dirt on the man that he’d labeled a pedophile – for no reason – as part of the case. So again, Musk and Co. will do whatever has to be done to win, and you can expect that they will indeed turn over every leaf and try every avenue of appeal in the process.

But on balance, it seems like Twitter’s legal team has come prepared for this. Knowing how Musk operates, they do seem to have established very solid contractual terms and obligations, that will be tough for Musk to wriggle out of.

I still wouldn’t be surprised if Musk’s legal team does, somehow, find a way out, but at this stage, it seems increasingly unlikely.

Maybe, given that he’s been able to slink out of various other obligations in the past, Musk’s arrogance is actually the weak point here, and he’s actually locked in.

We’ll find out soon, with a judge to decide whether any of Team Musk’s various accusations actually hold any bearing in the legalities of the agreement.