Hey, you know how your Instagram feed keeps getting disrupted by posts from people and profiles that you don’t follow, and largely don’t care about?

Well, it’s about to get even worse. According to a new finding by social media expert Matt Navarra, Instagram is now testing a new ‘Repost’ option, which would enable users to amplify any post by re-sharing it to their followers in the app. 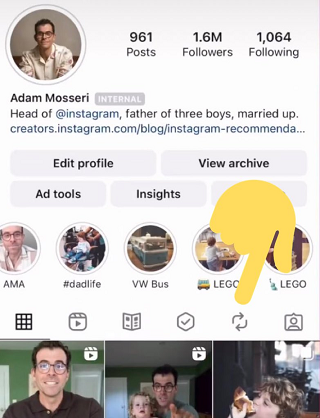 As you can see here, soon, users will be able to view a display of all of the posts that a user has re-posted.

Instagram has confirmed the test to TechCrunch, providing the following statement:

“We’re exploring the ability to reshare posts in Feed – similar to how you can reshare in Stories – so people can share what resonates with them, and so original creators are credited for their work. We plan to test this soon with a small number of people.”

So, essentially, retweets, but for Instagram feed posts instead.

Which will probably suck.

I mean, people have thus far been pretty upset with Instagram ramming more and more algorithmically recommended posts into their home feeds. The constant disruption of content from profiles that you haven’t chosen to see makes it harder to actually view the content from profiles that you do follow – which is such a strange approach from IG, given that the platform itself has previously sought to justify the need for a feed algorithm because:

“By 2016, people were missing 70% of all their posts in Feed, including almost half of posts from their close connections.”

So, Instagram brought in an algorithm to ensure users saw more of the content that they’re most interested in, because they were missing a lot of it.

But now it’s decided to add even more content into that mix – so, really, there’s almost no point following any profiles at all in that scenario. Just let IG show you stuff and hope for the best.

I suspect that, in part, this is what Instagram’s going for, following the TikTok lead and working to highlight the most relevant, most engaging posts from across its app to each user, so that it can just keep feeding you the most trending, sticky content, from all users, in the hopes that will keep you glued to your feed.

But that won’t work.

The fundamental difference here is that Instagram’s structure has been built upon people curating their own experience, and establishing connection via direct signals – by explicitly telling Instagram ‘I want to see content from this profile’ when they tap on that ‘Follow’ button.

TikTok opens to the ‘For You’ feed – from the beginning, it’s aligned itself around an algorithmically-aligned approach, which has never relied on who you choose to follow, as such.

It may seem like this is not a huge variance, but it is in terms of user expectations. Instagram has spent years telling users to build their networks, to interact with those profiles that you want to see more of, it’s sought to work with users in partnership to help craft their own, unique experiences.

Now it’s pretty much ignoring those inputs, and re-posting is another explicit step towards dismantling the IG that you know, in favor of one that Instagram thinks will be a better experience for you.

‘You don’t know what you really want, but we do.’

While TikTok – which, again, has been built from the ground up around an entirely different premise – is very, very good at showing you more and more videos related to your interests, based solely on your viewing habits, Instagram just isn’t in the same league.

Instagram chief Adam Mosseri has admitted such, and has vowed to improve its recommendation systems in this respect. But even if it can improve, is that really what people want? Do Instagram users want IG to essentially abandon its established processes, and their inputs/networks/connections, in order to flood their feed with randomized, tangentially related posts and clips?

As a counter, Mosseri also says that most personal sharing has switched to DMs and Stories anyway. So stop sooking about your precious main feed – if you want to see posts from people that you choose, go talk to them personally, rather than expecting to see it in your feed, where you always have.

I don’t know, it seems like a confusing approach from the platform, and one which also has a whiff of desperation. You would assume, given these significant shifts, that IG engagement isn’t going up, and the fact that it’s trying reposts – a feature that it’s long-held would not be beneficial for the app – is further testament to the fact that it’s looking to anything to reverse that trend.

Indeed, Instagram co-founder Kevin Systrom had this to say about re-posts back in 2018:

I can only imagine what Systrom thinks of the current iteration of his app, and where it’s headed. And while, under Meta’s management, Instagram has grown to a billion-user app, I do wonder whether it would have been able to achieve that either way. Maybe not as fast, but maybe, by sticking to its original premise and ethos, it could have still maintained a steady growth trajectory, without the need to latch onto every gimmick and trend.

I mean, BeReal’s growth shows that there is a real desire for more authentic connection and community engagement, outside of the constant highlight reels of viral clips.

Instagram was once the home of that, but increasingly, I don’t even know what it is anymore.

I’m guessing Meta doesn’t either, as its focus continues morph in line with the next shiny object.