Try as social platforms might, they just haven’t been able to make ‘fetch’ happen.

‘Fetch’ in this latest context being the online shopping trends that have become all-consuming in China, which western social platforms have been working to jam into their apps too, as a means to make their platforms even more addictive, while also facilitating more revenue-generating activity.

But despite a COVID-led jump in overall eCommerce activity, no one seems to care too much about the latest shopping tools on TikTok or Instagram – which has now led to IG scaling back its in-stream shopping program, and potentially abandoning the concept entirely.

As reported by The Information:

“Instagram is planning to drastically scale back its shopping features, the company told Instagram staffers on Tuesday, as it shifts the focus of its e-commerce efforts to those that directly drive advertising. The retreat shows how Meta Platforms is moving away from some long-term projects as it focuses on building its short-form video business.”

The Information reports that the current Instagram ‘Shop’ tab will eventually disappear from the app, with the company shifting to a ‘simpler and less personalized version’ of its in-stream product display.

Which is a significant shift away from in-stream commerce, which, at one stage at least, was a key focus for Meta’s ongoing product development and revenue tools.

But evidently, the demand just isn’t there – again, try as they might, western platforms simply can’t re-create Chinese market trends in every region.

Which Meta would know, given that it also tried the same with messaging, and converting Messenger into an all-encompassing platform back in 2016.

Following the lead of Chinese messaging apps like WeChat, which have become essential connective tools for Chinese users, Meta had hoped that by introducing Messenger Bots, that would enable businesses to create their own interactive chatbots within its platform, as opposed to having to build their own, dedicated apps, and drive users to download them instead. In theory, that would have the double benefit of helping businesses reach users in the apps that they’re already using, at much lower development costs, while it would also help to make Messenger a more critical utility, in a broad range of contexts.

Except, nobody cared about Messenger bots.

Meta pushed them as an option for some time, but eventually, it accepted that no one really wanted to use Messenger for much else outside of basic messaging, and in 2018, it launched a scaled-back, streamlined version of Messenger, after admitting that the app had become ‘too cluttered’ with add-on features.

Which, of course, included bots, which are now almost impossible to find in the app.

Still, that experience clearly didn’t dampen Meta’s hopes of riding the eCommerce boom into the next stage of in-stream shopping, and with Chinese shoppers flocking to live-stream commerce in particular, Meta smelled opportunity.

It added a ‘Shop’ element in Explore in July 2020, then expanded that to its own dedicated Shop tab in the app in November that year. 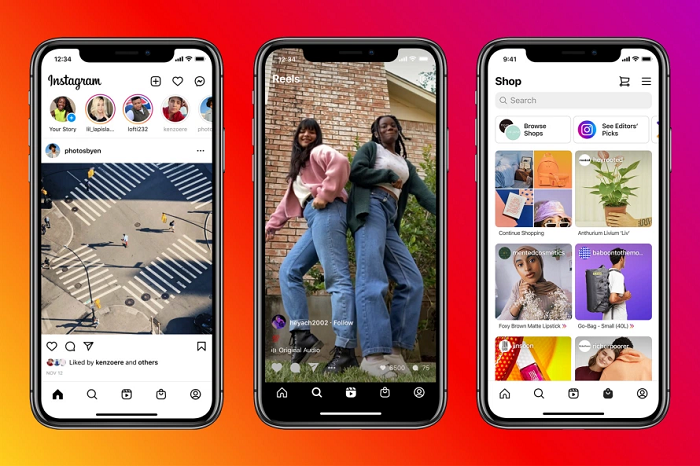 At that time, eCommerce sales were skyrocketing, at one point making up the equivalent of 10 years of online sales progress in just a 3-month period, with the global lockdowns forcing everyone to shop online, and become more accustomed to the convenience of in-app shopping.

Which most analysts had expected would be a sustained trend. eCommerce sales had been steadily rising for years anyway, the pandemic merely forced more stragglers to actually try it out, and the pervading view was that once most people had experienced in-app shopping, and the various benefits that it facilitates, that it would become the new normal, accelerating the decline of in-person buying.

Except, it didn’t. As the pandemic threat has eased, and physical stores have re-opened, eCommerce trends have fallen back into line with where they were previously, while overall, social media users haven’t shown an increased proclivity for shopping in-stream, despite having many more options to do so.

Again, unlike Chinese consumers, who have embraced these new forms of connection, western audiences just haven’t been as enamored by such – which is bad news for Instagram, which had hoped to use in-stream commerce as a key lever for re-directing funds to creators in the app. But it’s likely even worse news for TikTok, which has been reliant on eCommerce as a key driver of revenue share for creators in the Chinese version of the app.

TikTok, you would assume, had hoped to replicate that business model in other regions. But at this stage, it doesn’t seem like social shopping is going to become the major trend that some had foreseen, with Pinterest, Facebook, TikTok and now Instagram all seeing big declines in shopping interest and activity within their apps.

Instagram, of course, is also still trying to work out what it is, and what it will be in the current state of the social media market. After replicating Stories with great success, and slowing the growth of Snapchat in the process, it’s since turned its attention to short-form video, and negating the popularity of TikTok. And while Reels has proven popular in pure engagement stats (Reels consumption now makes up 20% of all the time spend on IG), users have bristled at Instagram’s repeated efforts to show them more Reels, and more content from users that they don’t follow in the app.

Part of the problem here is that Instagram’s trying to reinvent how its app works entirely, as it chases the TikTok dragon. TikTok has always focused on the top content, from anyone, as opposed to pushing you to follow specific people and profiles, which instead puts the reliance on its algorithms to identify the content that you’re likely to be interested in.

Instagram has traditionally prompted you to curate your experience, which we’ve all done – but now it’s looking to interrupt that with this new content approach.

That shift has been unwelcome for many users, and I’m not sure that IG will ever be able to successfully negotiate such a fundamental change, while add-on elements like shopping have also become more of a distraction, likely impacting overall take-up.

In essence, Instagram itself seems unsure what it’s supposed to do next, and what‘s the next stage in its progression.

But clearly, it’s now conceding that shopping isn’t it.

There are various implications stemming from this, but the bottom line is that western platforms can’t look to Chinese market trends as a guiding light for development. Different markets, different people, different trends that are not alike, and while the experiments make sense, going all-in on the next China-based trend probably isn’t the best strategy.

It’s also not great news for the many retailers who’ve signed up for Facebook and Instagram Shops, and what this could mean for their future reach and connection opportunities as a result. 10 Ideas For Getting 10k Instagram Followers With out Shopping for that Will Save Your Time, Stress and Cash.