Could more user control be the solution to Instagram’s most recent growing pains?

As part of Instagram’s ongoing quest to negate TikTok through blatant replication, it recently launched a test of a full-screen main feed, which incorporated regular posts, Stories and Reels into a single, TikTok-style display.

#Instagram is working on a full immersive feed ???? pic.twitter.com/zTXVpH4C6n

But people didn’t like it – at least, that’s what Instagram chief Adam Mosseri alluded to when he announced late last month that the company had concluded this test, and that it wouldn’t be introducing the format anytime soon.

But what if, instead of a full-screen IG feed, you had a choice? What if you could choose to switch over to the full-screen display if you wanted, for those who do prefer the TikTok-style UI?

That’s apparently now being tested with some users, with app researcher Radu Oncescu sharing this image: 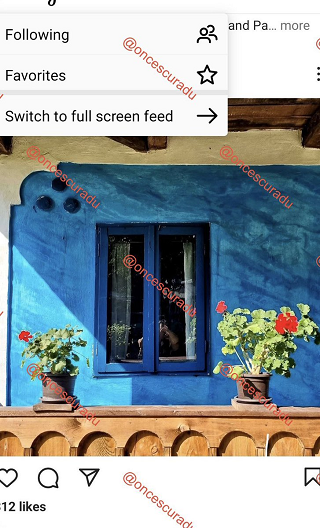 As you can see in this screenshot, the new option would be added to the menu accessible via the Instagram logo drop down, along with the options to sort your feed by ‘Following’ or ‘Favorites’.

This, increasingly, seems to be the way that Instagram is headed, with variable display formats that focus on different elements, so that each users’ Instagram experience is more tailored to their personal preferences.

Instagram chief Adam Mosseri has repeatedly noted that they want to app to better align with what each person wants to see, not just in terms of content, which is sorted by the algorithm, but by format as well. That could eventually see Instagram open to, say, a full-screen display of the latest Reels for those that engage with Reels content regularly, or Stories, or it may be that Instagram reverts back to the traditional feed of static posts, if that’s your preference.

Essentially, Instagram’s trying to build an algorithm that learns more from user behaviors, in order to make it a more compelling experience, for everyone. But at the same time, Mosseri also acknowledges that, one way or another, video content is likely going to dominate the feed over time:

“We’re going to continue to support photos, it’s part of our heritage – I love photos, I know a lot of you out there love photos too. That said, I need to be honest, I do believe that more and more of Instagram is going to become video over time. We see this even if we change nothing. If you look at what people share on Instagram, that’s shifting more and more to video over time.”

That makes sense – as younger generations, to whom video posting is now the norm, grow up, that inevitably means that more video content will be shared, and Instagram, Mosseri says, ‘will need to lean into that shift’.

As such, in some ways, even if IG wasn’t chasing TikTok, the feed would still be moving in this direction. But maybe, by providing more users with the capacity to sort the feed as they prefer, that could be a better experience.

Though will it get more people spending more time in the app?

That’s the real question. There are several UI improvements that social media apps could make that they won’t, because it’ll ultimately reduce time spent in the app.

For example, Facebook recently tested out new indicators in the search panel which showed how many new posts a user had shared since you last checked in.

Which is really handy – but it also gives you less reason to click across to their profile and check it out for yourself. So Facebook removed it. So while it’s actually a UI improvement, that makes it easier to navigate the app, it doesn’t contribute to Meta’s key measurable in time spent, so it’s not in its interest to keep it.

Instagram will approach its algorithm and feed sorting options in the same way, and with Meta’s own data showing that its AI-based content recommendations have led to a 15% increase in watch time for Reels, you can bet that it will be pushing more recommendations into your feed as a result. And while you can switch all recommendations off for a month at a time, IG isn’t going to let you turn them off entirely.

Because the data shows that people end up spending more time in the app when recommendations are shown.

Does that mean they’re having a better experience? Does that make the app itself more user-friendly, or better aligned to your personal preferences?

The answer, on both counts, is no, but the bottom line is that Instagram will make decisions based on what’s best for Instagram, not users.

In theory, the two should align, as people wouldn’t spend so much time in the app if they hated it. But in reality, there are levels to it, and it’s not clear that Instagram is taking the right approach to facilitating optimal engagement just yet.