If you haven’t heard, Meta really wants you to post more Reels, with Reels being the fastest-growing engagement surface across its apps, and already taking up more than 20% of the total time that people spend on Instagram.

In fact, video in general is Meta’s most engaging content format, occupying some 50% of the time that people spend on Facebook. As such, it’s no surprise that Meta keeps pushing users to share more Reels, as a means to both get more people spending more time in its apps, while also helping to boost their presence, and reliance on its tools.

And if you are looking to post video content to Facebook or Instagram this is worth a look. Today, Meta has published a new overview of the key elements that it factors into its video ranking algorithms – i.e. what it considers when deciding just how far your video posts will reach.

The full overview, which you can read here, includes in-depth explainers for each element, but in this post, we’ll break down the four key signals that Meta uses to rank video content.

The first element in its video ranking equation is ‘Originality’, which aligns with Meta’s broader push to amplify original creators, and provide more exposure potential in its apps.

“Original videos reflect the unique voice and value of the content creator. They are distinctive and are produced in a manner that’s never been made before. We prioritize original video to reward the hard work of crafting authentic content.”

Which is all good, all logical, both from a strategic and engagement standpoint. But how do you ensure that your videos are recognized for originality?

Well, the obvious is that it has to be unique content, created by you, and posted to your Page. You can also add your own unique takes to other material, but the emphasis needs to be on originality, as opposed to re-posting.

Essentially, as Meta has previously stated, it’s going to reduce the reach of re-shared content, in favor of original material. So if you’re re-sharing memes and GIFs as an engagement-baiting tactic, it may be time to re-think that approach.

The second element Meta notes is ‘Capture and Retain Attention’.

Meta says that videos that capture the audience’s attention, and inspire people to watch to the end, are likely to see increased distribution as a result.

“Retention is one of the indicators of how well the content was received by the audience – a slow and gradual decline in the audience retention graph can show that the topic and structure of the video match well with what your audience wants to see, while an early drop off may mean that the content isn’t what the viewer expected.”

So you need to keep people watching, which requires focus on your content structure, in order to maximize ongoing engagement. Which, of course, is often easier said than done – if all of the marketers who call themselves ‘storytellers’ were actually so great at telling stories, they’d probably be writing books and movies instead.

Storytelling, in itself, requires research and reflection, and it could be worth reading things like ‘The Writer’s Journey’ and other narrative structure books to get a better understanding of the fundamental elements of audience engagement.

Not all of your promos are going to fit into a traditional story arc, but grasping the key elements could be a way to ensure optimal retention, and thus, drive better reach with your content.

Also important – despite the focus on retention, Meta says that content length is not a key consideration.

“Content should only be as long as it needs to be so that it is relatable and engaging and keeps the audience interested for the entire duration.”

‘Loyalty and Intent’ is the next key element, with Meta putting emphasis on repeat viewership.

“When people regularly come back to view an account’s videos, we take it as a strong, positive signal for distribution. This is especially true when we see that people actively search for your content or seek it out on video-first destinations like Facebook Watch or directly on your account.”

Similar to retaining viewer attention, it’s one thing to say it, and another to do it, and it can be difficult to keep producing high-quality, engaging video content, that keeps people coming back for more.

Meta suggests that publishing bonus, unexpected content can help to keep your fans engaged, by propping up interest (potentially via Reels, Stories, etc.), while utilizing a longer-form storytelling approach, across multiple videos, can also help to maintain audience engagement.

“This includes writing clear titles, descriptions for your posts, and adding a few relevant tags. This can help more people see your content, both via Search results and via the recommended videos that we show to people in Feed and in Facebook Watch.”

“We prioritize content that sparks conversations and meaningful interactions between real people. To do this, we increase distribution for videos that inspire friend-to-friend or person-to-person interactions.”

So it’s not just comments in themselves that Meta now looks to emphasize, but comments that trigger further response and conversation in-stream. That’s harder for scammers to game, because while it’s relatively easy to automate a heap of random comments, which no one really reads or cares about, it’s difficult to actually drive conversation via automated means.

As such, prompting further discussion is the next level of this type of engagement, which then tells Meta’s system that people are looking to tell others about your video or post.

You can prompt engagement by asking questions, or leaning into the latest topics of discussion within your industry or niche, which others may also want to weigh in on.

Of course, another, less ethical way to do this is to take a partisan stance on a divisive issue – whether you believe in that stance yourself or not.

Many media commentators have weaponized this approach, with personalities that you can rely on to take the most polarizing, extreme side of any argument, which then triggers response, engagement, etc.

Sports commentator Skip Bayless is a good example. Bayless is known for his intense hatred of LeBron James, who, by any measure, is one of the greatest NBA players of all time. But Bayless knows that his criticism of LeBron will spark a flood of social media activity in response. 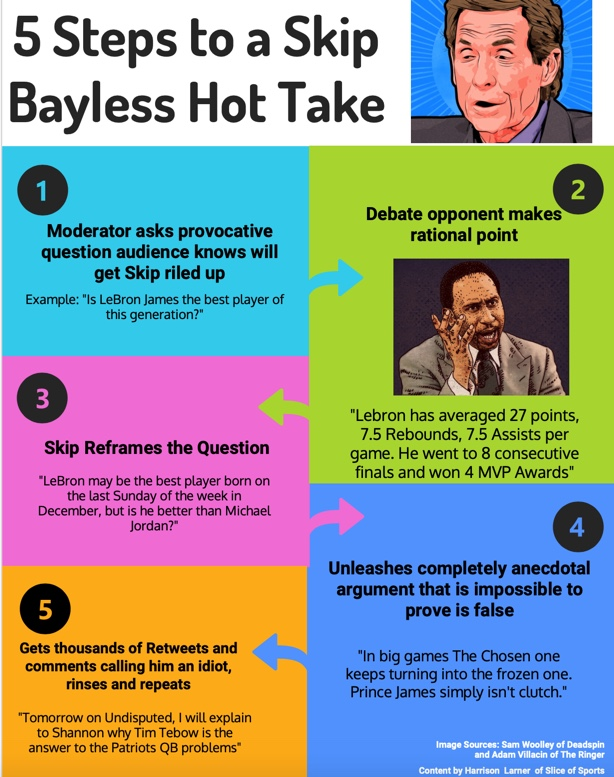 Politicians have also now learned this – and it’s worth considering, before you reply to any comment or remark that you disagree with online, whether you’re actually doing exactly what that person wants.

As a brand tactic, this is incredibly risky, but divisive comments can help to spark engagement, which can then trigger more reach.

Also, whether Meta wants to admit it or not, algorithmic amplification of this type has contributed to more societal division as a result, because it incentivizes argument as a means to improve performance.

So, those are the four key elements that Meta has built into its video distribution algorithm:

Focusing on these will help to improve your video performance – while conversely, Meta also advises that videos could see reduced distribution due to these common missteps:

Meta says that Pages that repeatedly exhibit these behaviors ‘may ultimately lose the ability to generate revenue via in-stream ads or other monetization tools’.

I mean, most of those are pretty obvious, but it is worth noting that insider circles and groups designed to boost engagement are frowned upon by Meta’s systems. How good Meta’s process is at detecting such is hard to say, but if you get caught out, that could pose problems for your strategy.

This is a valuable overview of Meta’s evolving approach to video distribution, which is crucial information for video creators and brands. And while there’s no prescriptive way to adhere to all of these requirements, it is worth taking a moment to consider your video approach, in line with these pointers.