In what may be the ultimate singular example of the Elon Musk experience at the app, over the weekend, Musk reinstated the former President’s Twitter account, despite saying, just three weeks ago, that no decision on account reinstatements would happen until Twitter had formed a ‘content moderation council’ to rule on such moves.

Again, what Elon says and what he does are often very different, which is an important contextual note in analyzing his process.

So, to provide a full overview, back in October, shortly after Musk took over at the app, and amid a wave of calls for him to reinstate Trump, as Musk had said that he would, Elon explained that this wouldn’t be on the cards anytime soon.

Knowing that he had to maintain appeal with advertisers, who are still reportedly cutting ad spend, and taking a more cautious approach to such decisions, Musk seemed to be scaling back his ‘hardcore free speech’ ethos, in order to avoid putting prominent ad partners offside.

Shortly after, Musk met with those very advertisers to allay their concerns, and explained that Twitter was indeed working to implement a content council, featuring various experts and civil rights leaders. Musk noted then that it would take months to establish this group.

That seemed to give Musk some room to work on this new approach to moderation, and reduce his own, direct input in such rulings. Which, in some ways, is the best of both worlds – Musk can say that he stands for total free speech, maintaining his position with his supporters, while this new Council makes actual rulings, that are more in line with ad partner expectations.

That would likely have been a much safer way to move forward.

But then, Elon changed his mind.

On Friday, Elon sent out a tweet stating that it was ‘Freedom Friday’, before reinstating the previously banned accounts of The Babylon Bee, Kathy Griffin and Jordan Peterson.

The poll eventually garnered more than 15 million votes, with the ‘for’ just outweighing the ‘against’. And true to his word, Musk did then reinstate Trump’s account, with the former President now able to tweet once again from his @realDonaldTrump profile. 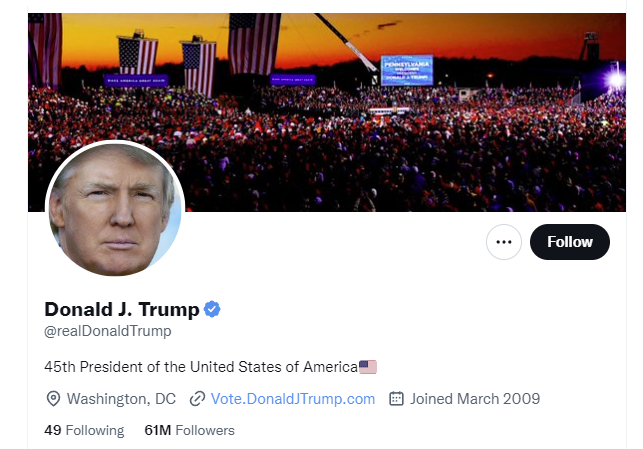 But he hasn’t, and he says that he won’t.

Trump Media & Technology Group has over $1 billion sunk into Trump’s own social media app Truth Social, with funding from a range Trump’s top supporters and advocates. A key proviso in that plan is that Trump has committed to posting exclusively Truth, even if his Twitter account were to come back. Trump could find a way around that, in posting to Twitter several hours after first posting in his app, but essentially, Trump’s pretty much locked into making Truth Social a thing, even with his beloved Twitter account now there and waiting for his attention.

So Trump might, eventually, start tweeting again, but right now he’s not. Which means that this was really more of an attention-grabbing move for Musk, once again, which also, as noted, contradicts his previous statements, and reinforces the fact that at Elon’s Twitter, anything could happen, at pretty much any moment.

That’s clearly helped Twitter gain more interest – Musk keeps saying that Twitter usage is hitting all-time highs, and thus far, it’s been able to keep running, despite that increased load – and despite Twitter’s headcount being cut by some 88% since Musk took over.

It’ll be interesting to see if the platform holds up, and while there have been reports of outages and other issues at the app, it is still working, which does, at least in a public-facing sense, add some weight to Musk’s approach in cutting staff to bare bones.

The big test will be the World Cup next week, which is expected to put increased demand on Twitter’s servers once again. And if the platform does hold up, with minimal impacts on performance, you can bet that other social apps will be reassessing Musk’s staffing approach, and considering if they need so many people to keep things running.

Which they might – but then again, 88% of Twitter’s staff are reportedly no longer working on the app. That’s gotta’ have some impact, right?

But to the point at hand, Musk’s decision to reinstate Trump is a perfect reflection of his approach in managing the app thus far. He says one thing, then does another; he appeals to advertisers to stay, then gives them more reason to be concerned about his approach.

In summary, who knows what’s coming next at Twitter, and if it’ll work. It could all come to a grinding halt this week, due to internal issues that are not being addressed, or Musk could keep finding new ways to generate headlines about himself and the app, which then keeps more people coming to it, which eventually makes it more of a magnet for ad dollars either way.

We’ll see what Musk has in store this week, in the lead-up to Thanksgiving.