Pinterest has seen a rise in engagement and usage of late, and there may be a good reason for that, with the platform publishing a new technical overview of how it’s improved its recommendation algorithms to maximize engagement – and specifically, how more recent, adaptive usage data has helped it boost engagement activity.

The full overview is pretty hard to read for the non-developer:

“The random time window mask is used to make the model less responsive and to avoid diversity drop. Then we feed it into a transformer encoder. For the initial experiment, we only use one transformer encoder layer. The output of the transformer encoder is a matrix of shape. We then flatten the output to a vector and feed it along with all other features to MLP layers to predict multi-head user actions.”

Yeah, it’s not an entertaining summary by any means, but in essence, Pinterest’s engineering team provides an explanation of how it’s improved its systems to take in more recent user actions in the app, which then makes the recommendations that it provides more relevant, thus improving Pinner engagement.

Which, of course, makes perfect sense, but it is interesting to note in a Pin-specific context.

Pinterest explains that it uses the most recent 100 user actions as a measure to determine individual interest, but it’s recently updated its process to refresh this data more frequently than it had been.

“[In order] to tackle the engagement decay challenge, we retrain the realtime sequence model twice per week. In doing this, the engagement rate has become much more stable.”

Because Pinterest is showing each user more relevant recommendations, based on their most recent activity, that creates a new flywheel of improvement in its Pin recommendations. 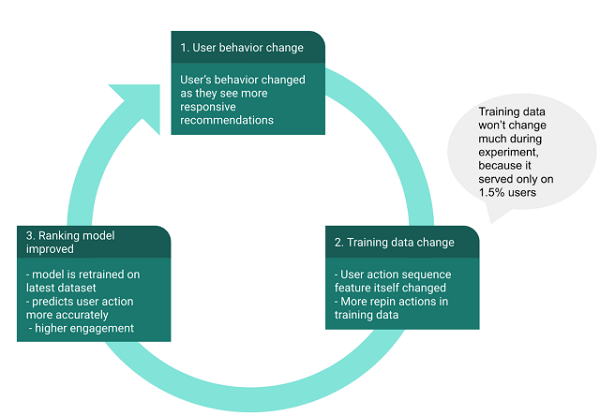 As you can see in this overview, fresher recommendations leads to more engagement behaviors, including re-Pins, which Pinterest notes is ‘one of the key indicators of user engagement on the platform’.

That then gives Pinterest more data on what each user is more likely to re-Pin or save, which then improves its recommendation system even more, which, overall, has led to significant improvements in its process:

The process also reduces Pin hides, or people getting rid of irrelevant recommendations – while Pinterest further notes that the gains it’s since seen in actual production are even greater than these test stats.

“The actual Homefeed repin volume increase that we observed after shipping this model to production is higher than online experiment results. However, we will not disclose the exact number in this blog.”

In summary, Pinterest has improved its algorithm by refreshing its data more often, making its Pin recommendations more relevant, and prompting more engagement actions. Pinterest can then factor those engagement actions into its process, which then further improves each users’ individual experience.

Also, Pin Saves are a key factor that defines algorithmic reach. There’s not a heap you can necessarily do with that info, but it’s worth noting that this is a critical element that will define your Pin performance in the app.

You can read Pinterest’s full technical overview here if you’re looking for further info on the update – though again, it is fairly technical, and you’ll find yourself squinting and re-reading a lot of lines.