Reddit has released a new research report which looks at how the platform facilitates community engagement, and the importance of such in the modern environment, where people are increasingly working from home, and are seeking new ways to stay connected.

Based on interviews with over 2,000 social media users, Reddit sought to find out how people are using social media to connect, and the role that Reddit, in particular, plays in facilitating community engagement.

Which also points to opportunities for brands, by tapping into these key notes in alignment with your campaign approaches.

You can download Reddit’s full, 13-page ‘Find Your People’ report here, but in this post, we’ll look at some of the key notes.

First off, Reddit says that its platform is ‘synonymous with community’, and outperforms all other apps in the key aspects of community-building and engagement. 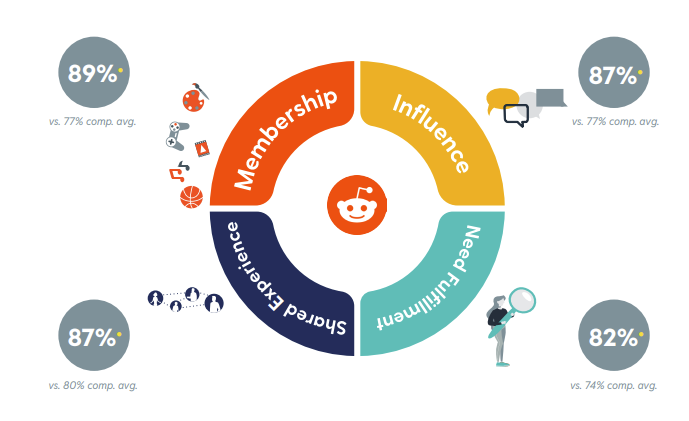 That makes some sense. Reddit hosts over 100,000 active, engaged communities, focusing on a wide range of topics, and if you’re looking for the most passionate fans on a subject, you’re likely to find them within these subreddit groups.

Reddit also helps to facilitate positive engagement through community trends, while the up and downvote process, which is seen as a risky approach by other platforms, actually helps the Reddit community to weed out troublemakers and trolls, by reducing exposure for more divisive opinions. That’s as opposed to algorithmic amplification of such to maximize engagement – whatever that ‘engagement’ might be.

And because subreddit posts and comments are community-moderated en masse, as opposed to being hidden by automated systems or internal restrictions, the decisions on such reflect the consensus of each community, which helps to establish agreed norms and behaviors in each.

The report also suggests that users see Reddit as ‘more additive, not addictive’. 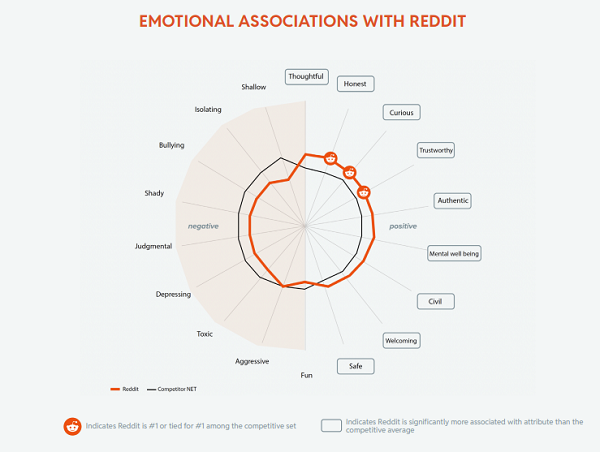 “For our study, we asked half of the participants to stop using Reddit for three days. Without access to the communities they look forward to engaging with, users reported feeling isolated from their communities and out of the loop. They wondered what they’re missing out on, because Reddit is an important part of their routine and where they turn to stay informed.”

In conclusion on this element, Reddit says that the platform was found, overall, to have a positive impact on users’ mental well-being, by fostering a spirit of inclusion and community, as opposed to more addictive, harmful traits.

Reddit also notes that its lack of reliance on algorithmic amplification, in favor of human moderation and feedback, democratizes access.

“While what you see on most platforms is unique to your algorithm, on Reddit everyone sees the same content within the subreddits they are a part of, as well as the popular page. Because all redditors have the same access to content, it minimizes the social media silos that tend to become echo chambers.”

That, arguably, ensures that Redditiors are exposed to more opinions and data points, which could help to provide a more rounded perspective on key trends. And with the community voting on the most important angles and elements – again, as opposed to an algorithm seeking to boost the reach of the posts that spark the most responses, whatever they may be – that may also help to showcase the most important aspects of new stories and trends, which could change opinions relative to user consensus.

And despite its reputation as being hostile to brand approaches, Reddit users are actually open to brands participating in subreddit discussion:

“Reddit users welcome brands into their communities. In fact, redditors want brands to actively participate in their communities and interact with them directly, offering brands the opportunity to cross the bridge from “outside advertiser,” to “members of the Reddit community,” and make more meaningful connections with their audience.” 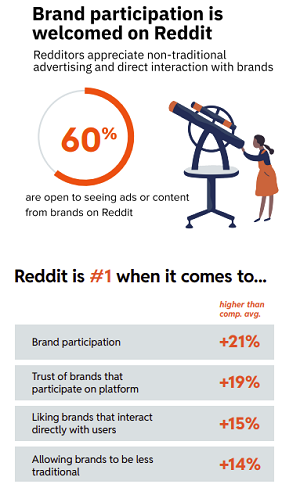 That likely relates to key discussions around products, with the direct insights from the creators themselves helping to enhance the discussion. Which could also go the other way, with negative discussion about, say, a specific product only likely to get worse if the brand can’t provide adequate answers to redditor queries.

But the feedback, overall, shows that brands can benefit from being part of these engaged Reddit groups, if they approach such in the right way.

It’s an interesting overview of how people view Reddit engagement, and the importance of the platform for its 50 million-plus daily active users. Which is nowhere near the usage of Facebook or Instagram, but in many ways, Reddit is better at fostering real community, and genuine engagement, with a focus on democratizing the discussion, and the key focus points, as opposed to using algorithms purely to maximize usage.

Which is a key note, and if you are looking for new ways to expand your digital presence in 2023, it may be worth investing some time in Reddit communities, to see what’s being said about your brand and niche – while also noting where you may be able to contribute. Reddit Shares Insights into Usage by Parents and Students [Infographic]