Snap is holding its annual Lens Fest event today, where it’s already provided a range of new insights into key AR advances, and how Snapchat is aligning with the next digital connectivity shift.

Snap has also shared a range of new AR usage stats and notes at the event. You’ll be able to tune into all the Lens Fest sessions on-demand here, but in this post, we’ll take a look at some of the key announcements and updates.

First off, Snap says that the use of AR for shopping is also on the rise, with more than 250 million Snapchatters engaging with AR shopping Lenses since January 2021.

Commerce is a key area of opportunity for Snap, and with people increasingly looking towards digital goods, Snap’s also looking to merge in new options, like buying digital clothing for your Bitmoji avatar, which could kickstart an all new payment ecosystem within its app.

And this will form another element – Snap’s announced a new AR experiment which will see a small group of creators and developers working on new Lenses that will include paid add-on elements, like alternative presentation formats and digital enhancements. 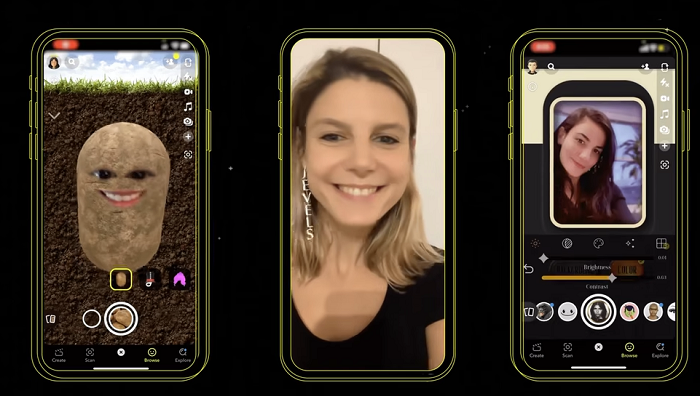 For example, with the first Lens above – Potato Lens creator Phillip Walton says that users have asked for ways to enhance or upgrade the Lens with alternate variations. Now, under Snap’s new initiative, Walton can charge users Snap Tokens to provide new outfits, so you can turn the potato into a police officer, a magician and more, while also funding new innovation and development.

That might seem ridiculous to some – why would someone pay for a new outfit for a digital potato? But with 250 million users engaging with Snap’s AR elements every day, there will be some within that who will be keen to pay for AR enhancements and extra features.

Get those additions right, and it could be a big winner – and if Snap can get more users spending more Snap Tokens, that will be another step towards building an additional revenue stream, both for creators and Snap itself.

Snapchat has also reported that its broader AR ecosystem is expanding, with over 300,000 AR creators and developers taking part, contributing to more than 3 million AR Lenses via its creation tools.

This is increasingly going to be an area of demand. As Meta looks to usher in the metaverse, and more immersive digital environments become a more common element of how we interact, every platform is going to need builders, and creative minds that can formulate interesting, engaging AR and VR experiences.

AR tools are another step towards this, while the development of AR glasses will also facilitate all new connective use cases with more immersive digital experiences.

On that front, Snap didn’t really share anything new about its AR Spectacles, but it did note that:

“Over the past two years, hundreds of developers from 30 countries have experimented with our AR Spectacles, building hundreds of Lenses right in Lens Studio – from learning to read music to saying what constellation you want to see.”

Snap is actively working on AR Spectacles, though they remain a way off, but experiments like this highlight the possibilities, and what you can expect to see from Snap in the near future.

In order to keep fueling its AR development, Snap has also announced a new ‘Lensathon’ event, which will see creators compete for a $200K prize pool. The event will be open from now until January 31st, and will encourage AR creators to ‘push what’s possible in AR’.

It’s interesting to note the various AR innovations and advances we’re seeing, and what they may mean for the future of connectivity. Snap has made AR a focus for this reason, and it remains a leader in the AR space, despite having significantly fewer resources than its much larger rivals.

The next question, at least on the AR front, is when will AR glasses arrive? Which no one seems to know for sure, but they are coming, and when they do, I would bet that Snap’s AR offerings for AR devices will be significantly better than what’s provided by others in the space, be it Apple or Meta, or someone else.

Snap knows culture, it knows art, and it knows how to work with creators to facilitate next-level experiences in the space.

That will hold Snap in good stead, and could see it become a key platform for the next stage.