Avatar personalization is increasingly becoming a new form of expression, and a new opportunity for brands, and Snapchat, via its popular Bitmoji avatars, is looking to latch onto this shift by incorporating new digital clothing options into its offering.

And this could prove to be a significant step.

In a new partnership, Snapchat and adidas have teamed up to release a new line of exclusive Bitmoji clothing which, for the first time, can be purchased via tokens acquired in the app. 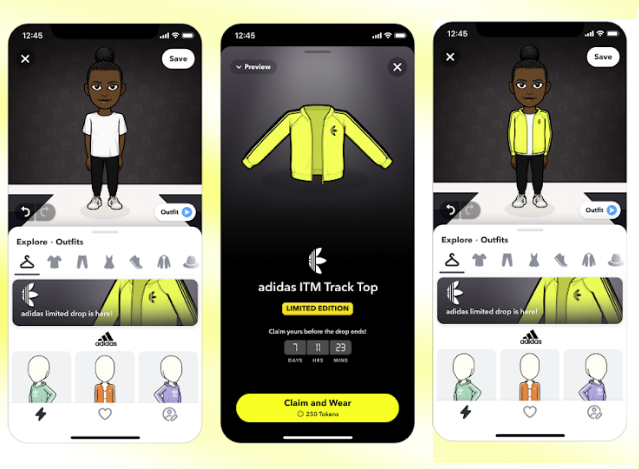 “We’re excited to announce the first-ever Bitmoji Drop in partnership with adidas that allows Snapchatters to use Tokens to claim an exclusive “Into The Metaverse” (ITM) track jacket. Until Friday, Dec 9th, Snapchatters can claim an exclusive adidas ITM track jacket in the brand’s recognizable yellow colorway, featuring the adidas web3 logo and black stripes on the sleeves.”

As you can see, the new virtual jacket could be an eye-catching item for your Bitmoji character, which could make it a sought-after digital collectible within the app.

But it’s the purchase process in this instance that’s of the most interest.

As Snap notes, users will be able to buy the ITM track jacket in the app for 250 Snap Tokens. Tokens are purchasable in the app, and can be exchanged for goods within Snapchat’s various shops and offers.

As you can see in this image, Snap Tokens come in variable packages, and can be used in Snapchat’s various shopping and access offers, which Snap’s hoping to expand into a broader digital commerce eco-system within the app.

Bitmoji are a key tool for Snap on this front. The cartoonish doppelgangers are used by over 250 million people every day, while over a billion Bitmoji avatars in total have been created. As the metaverse push continues to take shape, that could prove highly important, because users will increasingly be looking for the best avatar options to represent them in these digital spaces, and with so many people already developing connection with their Bitmoji, that could see broader adoption of these characters as representative tools.

Which, of course, is only a fraction of Snap’s 363 million daily active users. But that’s the thing – Snap doesn’t need to get all of its users to purchase digital items for this to be a profitable initiative, with the cost of production, in relative terms, very low, as there are no physical goods, and thus, far less outlay for these products.

Though Snap is also experimenting with processes that could eventually enable users to convert their Bitmoji clothing purchases into real-life items, providing more connection between your online persona and your actual self.

Combine all the pieces – tokens, exclusive items and real product conversion – and you can see the framework of Snap’s commerce systems taking shape, as it eyes the next stage of digital connection, and where its platform fits within it.

To claim your own adidas Bitmoji jacket: