Well, it didn’t take long for TikTok to get the gist of the social media cloning game.

Today, TikTok has announced a new feature called ‘TikTok Now’, which will prompt users to share a selfie, using the front and back camera, at a random time each day.

As explained by TikTok:

“Making possible deeper connection and entertainment in a fun format, TikTok Now invites you and your friends to capture what you’re doing in the moment using your device’s front and back camera. You’ll receive a daily prompt to capture a 10-second video or a static photo to easily share what you’re up to.” 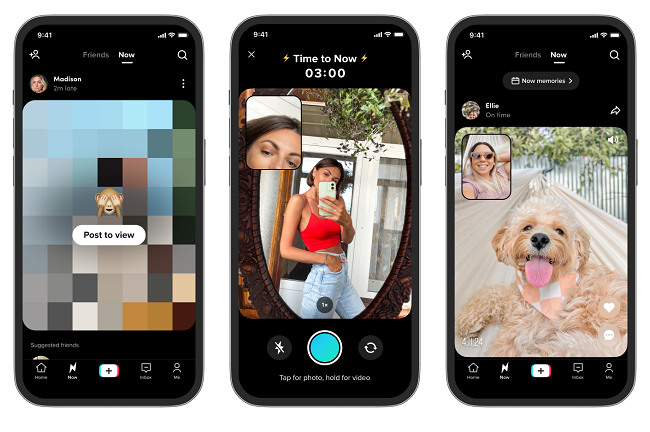 The feature is basically a direct rip-off of BeReal, whose rapid growth and rising popularity has already seen its key elements replicated by Instagram and Snapchat as well.

And now, TikTok’s getting in on the same, with the feature being given a new tab in the app, and even a new, separate app in some regions outside the US.

Both those approaches are very different, and it’ll be interesting to see whether TikTok Now catches on in either form. This is particularly relevant in the case of TikTok, because unlike other social networks, TikTok has framed itself as ‘an entertainment app’, due to its focus on highlighting the best content from across the platform, as opposed to users curating their experience via their own friend and interest segments.

Now, it seems that TikTok’s leaning the other way, and encouraging more direct friend interaction. Which has always been a part of the app, but it’s interesting to note in comparison to Meta, which is now trying to expand people’s feed experience beyond their established social graph.

So, will it work? Will TikTok users enjoy having BeReal in the app that they’re already using?

That’s really the key lure – while social platforms are continuously copying and stealing elements from each other, the main aim here is the dilution of differentiation, giving people less reason to go and download a whole other app.

You probably know people who refuse to download TikTok, but scroll through Instagram Reels regularly. That’s the audience and behavior that this approach is aimed at, keeping users in their apps for longer – as opposed to, say, killing off a competitor directly.

TikTok, Instagram and Snap might only keep a tiny fraction of their audience from downloading BeReal by replicating its core elements, but that could end up meaning that a few million users now won’t drift off to another app to connect with their friends.

So it doesn’t need to be as good, and the platforms don’t care that people might scoff at their blatant duplication. Because it does work, it does keep some users from downloading other apps.

And in some cases, like Instagram Stories, the replicators can actually become the market leaders with such features. So whether you like it or not, it’s a strategy that they’ll keep using in the battle to maintain relevance and audience.

But again, the bigger question in this instance is whether TikTok is looking to incorporate more friend-focused features in the app. It has seemed that TikTok has been winning by taking the opposite approach, which gives it a much wider pool of content to pull from when showing users the attest clips in their ‘For You’ feed.

Maybe now, TikTok is looking to beef up its competitive offering, in more ways, as it looks to the next stage of social platform dominance. TikTok Outlines its Preparations for the Upcoming US Midterms