TikTok’s taking the next steps forward in its eCommerce integration push, with the introduction of new Shopping Ads, which will provide more ways for brands to promote their products in-stream. 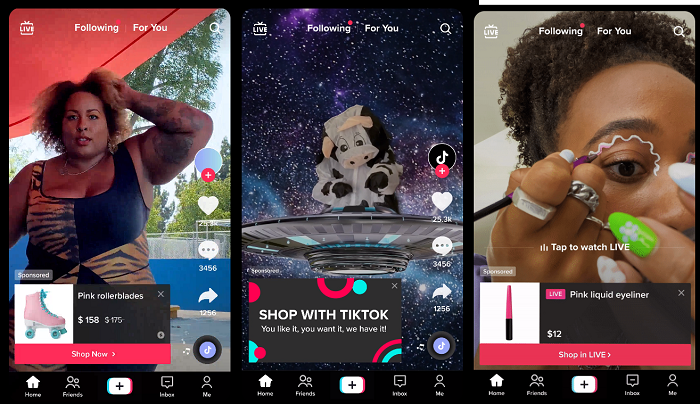 As explained by TikTok:

“Shopping Ads is a simpler, smarter, and more advanced ad solution that helps brands meet shoppers wherever they are in the purchase journey, sparking demand and boosting sales. It’s a three-in-one solution with new formats to adopt and combine: Video Shopping Ads, Catalog Listing Ads, and LIVE Shopping Ads.”

You can see the three new formats in the examples above, with product details overlaid on-screen to better highlight your items to viewers.

Though it’s not entirely new. TikTok has actually offered the same options for years in the Chinese version of TikTok, called ‘Douyin’.

Live shopping hasn’t seen the same take up in western markets as yet, but TikTok’s hoping that it can still become a thing, and provide it with another means to help creators generate direct revenue from their TikTok efforts, thereby expanding its business ecosystem.

Though the chances of live shopping seeing similar response to what it has in China are not great. Meta recently scaled back its live commerce experiments due to lack of user interest, while TikTok itself has also had to reassess its European eCommerce plans after poor initial response. That’s not to say that it won’t eventually take hold, but initial indicators suggest that western users are potentially more wary of such options – or that they don’t necessarily see TikTok as more than an entertainment platform as yet.

Still, TikTok remains confident, with its own data showing that users are interested in more in-stream buying options.

One way or another, you can expect it to explore every opportunity, which also presents new ways for brands to reach consumers, and adds another potentially valuable consideration for your holiday marketing push.

Some of these elements remain in limited testing, but if you are interested, you can contact these partners for more information.

TikTok has also shared this overview of how to implement Shopping ads, with merchants that are already utilizing approved eCommerce platforms able to skip the initial steps.