TikTok has continued to maintain its dominance as the app of choice, for young users in particular, though there are some indicators that its growth is now slowing after its meteoric rise over the past two years.

According to the latest data from AppFigures, TikTok was once again the most downloaded app in November, followed by Instagram, Facebook and TikTok editing app CapCut. 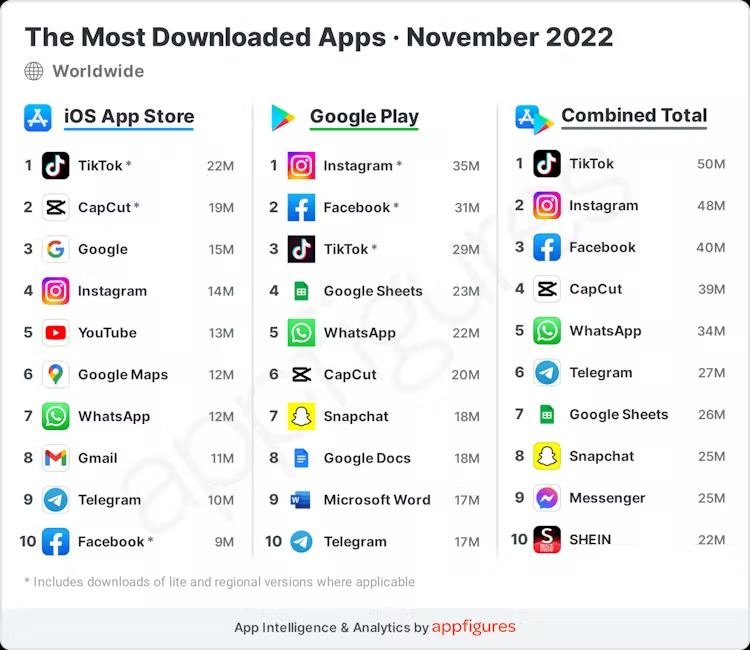 As you can see in these charts, TikTok and CapCut were actually one and two on iOS, while Instagram remains popular on Android, which is at least in part due to downloads of the app in India, where TikTok is banned.

And despite the many rumors of its demise, Facebook remains popular, especially in developing markets, while the overall rise of CapCut once again points to the influence of TikTok, and the expanded opportunity for the app to facilitate new trends and monetization opportunities.

But as noted, there are some signs of weakness in TikTok’s thus far unstoppable growth machine.

According to recent data sourced via Sensor Tower (and shared by Eric Seufert), US installs of TikTok declined almost 33% year-over-year in November.

A growth plateau, to some degree, is expected, given overall downloads of the app over time, but it’s worth noting that Meta’s apps have continued to see download momentum, as TikTok has begun to slow.

That might not mean anything major as yet – and I definitely don’t think it suggests that TikTok is losing audience attention. But it’s another trend to watch, and it’ll be interesting to see if there’s a shift away from TikTok, or whether its growth is actually restricted to younger audiences, much like Snapchat. Though even then, TikTok’s growth has already far outstripped Snap in overall usage.

Will TikTok’s growth trajectory continue upwards in 2023, or will reports of harmful trends, connection with the CCP, and the continued replication of its features stop some users from downloading the app?

It has seemed, up till now, that TikTok was simply going to eat every other app in its path, but maybe, we’re seeing the first signs of hesitation, which could mark a more significant usage shift in the next year. TikTok Will Now Let Users Tag Books in Their Clips, Leaning into the ‘BookTok’ Trend