Twitter has announced an expansion of its Campaign Planner element in Twitter Ads, providing more insight into projected performance before you launch your promotions. 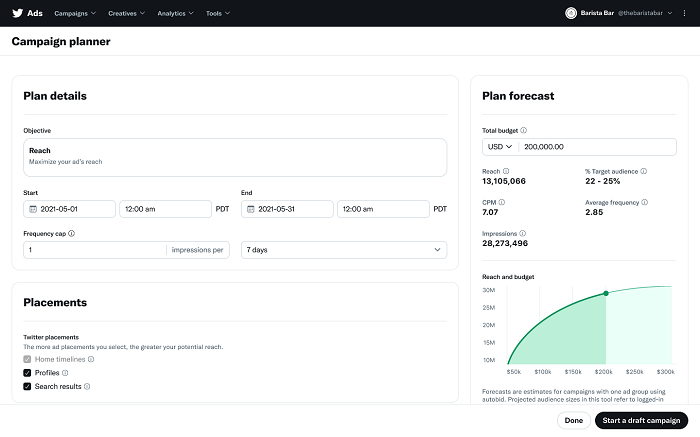 As you can see in this example, Campaign Planner provides forecasts on reach, impressions, frequency, and CPM, based on your chosen campaign parameters, while it also provides insights on budget requirements, and likely results, all built on Twitter’s database.

That could make it much easier to map out your Twitter ads approach, with more data to go on in planning your optimal Twitter ads strategy.

Of course, the insights provided are based on estimates, so they won’t be 100% accurate, but they should be indicative enough to provide value in your assessment.

In addition to this, Twitter’s also added the capacity to forecast your Video Views campaigns.

???? We know how important it is for you to understand the size of an audience you can potentially reach with your campaigns.

???? To aid with this, we’ve expanded our Campaign Planner tool to 15 more markets and now support the Video Views objective! pic.twitter.com/eWoYvEp6KK

Up till now, Campaign Planner has only supported Reach-based campaigns, but now, you’ll also be able to map out your video promotions based on internal insight.

Advertisers can also now use Campaign Planner to forecast Reach campaigns within the Replies placement.

It’s good to see Twitter adding more data insight tools to help plan out ad strategies, and while the data is based on estimates, it could be a valuable planning tool to assist in your process.

Campaign Planner is available within the Twitter Ads platform – you can read more about the option here.