Twitter has updated the display of the ‘Bookmark’ option in the app, which is one of several key fixes that Elon Musk had requested in recent weeks, as a means to help boost in-app engagement. 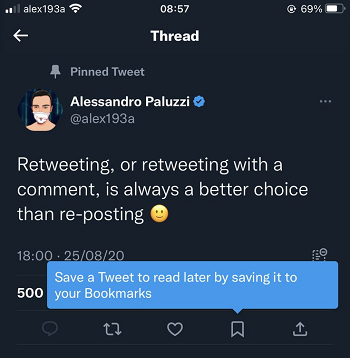 As you can see, in this new format, the Bookmark button has been added to the lower function display when you expand a tweet. That, ideally, will get more people using the option, which Elon personally views as a ‘silent Like’, and another measure of engagement with tweets.

See a Tweet you want to save for later? It should be easy!

A few weeks back, Musk tweeted that Twitter’s Bookmark functionality was hidden by ‘obscure UI’, which meant that many users likely didn’t know that it even existed. The value of Bookmarks is that it provides another means to interact with a tweet that you may be interested in, but may not necessarily ‘Like’, as such.

There’s been much debate over the terminology of ‘Like’ and what it means in a tweet context, as well as the use of the heart icon for the option. In many, if not most, cases, a heart probably doesn’t represent the intent of why a person might tap on that button, which is why Elon is pushing Bookmarks as an alternative, and a means to tag and flag items for later reference.

Yes, that will be added in an upcoming release. Also, if your tweet is bookmarked, it will be treated as a “quiet like” and increment your likes counter.

So Bookmarks will also be counted as Likes. Kind of. I don’t know how that works.

Will that have any real impact on tweet engagement?

Probably not, but again, Elon seems to be of the belief that bookmarks – like Community Notes and verification ticks – are actually far more valuable than you or I realize.

Maybe he’s right, and by updating this, and sharing news of that update with his 126 million followers, that’ll spark a new wave of users engaging with tweets in all new ways – and make Bookmarks a more relevant metric consideration for marketers moving forward, due to its impact on tweet reach (given they’re counted as Likes).

Or it doesn’t. Either way, probably not a major expenditure of time and energy from Twitter’s dev team to try it out – though given the amount of smaller errors and issues that are filtering through Twitter’s systems right now, it doesn’t exactly imbue trust that Musk’s ‘hardcore’ management style ends up producing the best work.

I mean, Twitter’s certainly pumping things out, and getting updates to market faster than ever. But most are not 100%.

Not sure I’d feel comfortable if that same approach was being applied to, say, self-driving cars. Or rockets.