Twitter’s developing yet another audience control option for your tweets, with a new toggle that would enable you to either stop people from mentioning your @handle completely, or limit mentions to only those who you follow in the app. 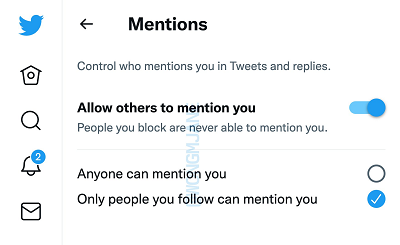 As you can see in this image, posted by app researcher Jane Manchun Wong, the new option, which Twitter’s currently experimenting with, would give you more control over how people can interact with your tweets.

At the top, there’s an ‘Allow Others to Mention you’ toggle, which would stop people from referencing your @handle entirely.

That, presumably, would just deactivate any mention of your handle, much like Twitter’s recently launched ‘Unmention’ option, which lets you leave Twitter chats that you no longer want to be a part of. 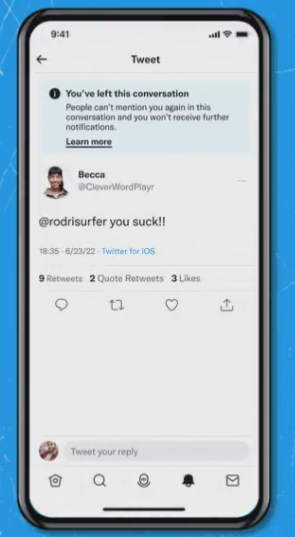 As you can see in this example, if you choose to leave a conversation through this option, your handle link is then deactivated within that thread. People can still mention your handle after that, but it won’t link back to your profile, and you won’t be alerted to such.

Presumably, if you choose to stop others from mentioning you entirely via this new toggle, that would follow similar logic – you wouldn’t be able to stop people using your @handle in their tweets, but it would no longer be an active mention, as such.

In addition to this, there’s also a new option which would enable you to limit mentions to only those who you follow in the app.

Twitter’s rolled out a range of audience control tools for tweets over the past year and a bit, including unmention, as noted, along with restricted replies, Twitter Circles for private group chats, Safety Mode, which autoblocks spammy or abusive replies, and Communities for enclosed, topical discussions.

In combination, these elements could have a significant impact on the way that Twitter functions, moving away from its ‘global town square’ approach, and giving everyone a voice on topical discussions, to a more siloed set of diverse, but walled off, tweet chats.

Which could be a good thing. The reason that Twitter has added all of these elements is to help users avoid the negative impacts of public posting, with many people simply opting not to share their opinions in the app due to fear of being ‘canceled’ if they say the wrong thing.

Indeed, a Pew Research study published last year showed that around 25% of Twitter users in the US produce some 97% of all tweets.

That’s a lot of passive consumption of Twitter content, and a big part of that is likely, as noted, the fear of being called out for saying the wrong thing, with the public nature of the platform meaning that your bad takes can be quickly and broadly amplified for all to see.

By providing more control options, you reduce that concern, while they also give people more options to shut down spammers, creeps, trolls and anyone else who wants to provoke you in the app.

Which is good – users should have the option to dictate their own Twitter experience, and in some cases, you just don’t need to be entertaining the rubbish that people want to share.

Though there would also be concerns around public figures shutting down dissenting opinions, and using tools like these as a means to guide certain narratives amongst their audiences.

But given that most of these other tools have already been released, and they haven’t necessarily been used for negative purpose (for the most part), it seems like less of a concern than it once would have been, and as such, it probably makes sense for Twitter to provide even more control tools to assist.

Twitter hasn’t made any official announcement on the test, which is not public as yet, though one Twitter developer did confirm that it’s being investigated (before deleting the tweet).

I wonder how Elon Musk feels about audience controls, and how that aligns with his vision for the app?